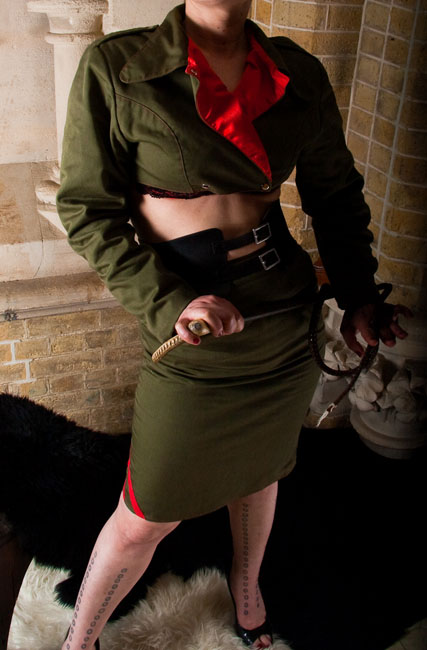 I am Eris, an ecstatic mischievous force unleashed upon the unsuspecting universe.

A pirate wreaking havoc. Bringing the storm into to your safe haven, breaking, entering, pillaging, perverting. Then sailing out into the big blue sea in possession of your treasures. Leaving you forever transformed. If you are lucky, I will snatch you away on an expedition to uncharted territories.

I am a a life -style mistress and switch with an immaculately filthy mind..

When I play with you, we are bandits riding together into the wilderness. Danger and adventure pulsing through our veins.

You will be striped of inhabitation. I will wave my magic wand. Now tell me what I've turned you into: a fiend, a fallen angel, a naughty brat, a hero, a greedy beast, a pet, a shameless hussy, a warden or an inmate?

I will make you everything you can become.

I will take you apart and into your self.

Like the most of the alluring mythological creatures, I am androgynous.

My striking good looks, raw sexual energy and husky whisky voice, are a captivating mixture of the womanly, the boyish, the camp, the warm and the tough, the intimate and sadistic, the gentle, the wanton and the rough.

Born with a cunt, but pack some fearsome cocks, and hotly embody all genders.

My habitual form is a devious punk – rock boyish bitch with smouldering brown eyes, fair complexion and shaved dark short hair. However, I am a consummate shape shifter.

I possess a wealth of cultural and intellectual capital, and do not hesitate to use it to my advantage. But I'm no lady. Dainty manners are way too restrictive.

I am a cerebral hellcat. 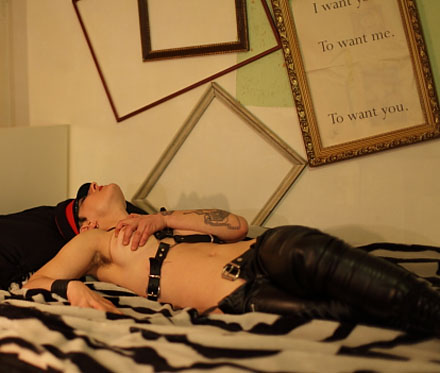 MY LIFE AND LOVES

I hail from a small military dictatorship. My family a proud dynasty of industrialists and patrons of the arts, collaborated with the regime. They were forced to relinquish most of their estates, but retained considerable influence through my grandmother's position at the Ministry of Truth. My father invested in homeland security patents, and bright new fortunes were made.

I was educated in an elite military academy. And by private tutors hired by my parents to insure that I am well versed in classics and the arts.

The only daughter in a family of boys, it soon became apparent, much to my mother's dismay, that I was not cut out for piano and ballet.

Instead, I preferred to spend my time in target practices, our small private zoo where I kept a pet she-wolf, hiding in the basement reading forbidden literature, and on horseback. The jury is still out on the question if I liked riding because of the boots, whips, spurs, and big strapping beast between my leg doing my bidding, or if I am a pervert due to early exposure to all of the above.

When I reached adolescence, I started getting into troubles. asking dangerous questions and fraternising with “undesirables”.

At 17, I was caught in a raid of an underground club, while engaged in “unnatural” intercourse with a very fetching young couple, who also happened to be on the intelligence agency's most wanted list. Inflammatory materials and devices were found on the premises.

Fortunately, my family bribed and bullied my way out of prison.

However, in order to avoid further hazardous scandals, they shipped me off to study biomedical science at the university of Antwerp.

Less then a month after I first set foot on Belgian soil, I emptied my student bank account, cut and dyed my long tresses into a purple Mohawk, and hitch-hiked to Amsterdam.

Before the year was out, I was formally disowned by my family. Fine. I survived: Joining then leading a gang of rent boys and window girls, and learning how to live outside the golden cage by hustling gambling & pool addicts, misguiding tourists, wheeling and dealing, prize- fighting, club hopping, and having a whale of time.

In a private party held at the crypt of an old church by an Italian film director, I was introduced to Mistress SH: one of Amsterdam's legendary and oldest reigning dominatrices. She took an instant liking to my hot yet uncouth self, and patiently showed me the ropes – on the condition I'll veer away from my slippery hell-for leather path.

Mistress SH was a classic continental mistress. One of the dying breed who was cheerfully merciless and non-compromising while always ensuring her life-long slaves wrap up properly and eat a nourishing meal after spending 4 hours fixing her plumbing in a French maid outfit.

She also registered her dungeon as an NGO for adult education.

Together, we travelled the world in style, with our band of merry mistresses and subs, and hand-picked an enviable collection of gorgeous play-mates in both Hemispheres.

When Mistress SH retired, I used my savings to put my self in style through the Rietveld Academie. After graduating with first class honours, I moved to London and embarked upon another career, Containing my self with a few regular partners.

But a few years later, I grew restless. This world was not enough.

I missed the chance encounters with fascinating strangers, the powerful exchange of financial gain and agonising pleasures.

And this is where it all begins....