March Scenario: NOTHING TO GAIN BUT YOUR CHAINS

The fancy iron work on the imposing cemetery gates would make them an easy climb, for someone as agile as you intend to become. But the ice-slippery bars and those sharp spikes at the top mean business: one miscalculated move, and you would be impaled, damaging the goods beyond repair.

If you do not succeed tonight, you will be trapped, assuming that you manage to evade the stewards and remain here after the gates are locked.

Creeping into the cemetery at midnight would have been more in keeping with tradition, and less infested with dog walkers, joggers, and furtive lovers. All those pathetic humans, blithely strolling in their mail-order snow boots and two seasons old festival wellies, entirely ignorant of the ecosystem of parasitical predators and willing game stalking the the mossy tombstones.

But as your stiff knees, slackening biceps, and aching spine make you painfully aware, you are human, still, saddled with a body growing increasingly estranged from the magnificent specimen you once were. Climbing that gate at night might have been doable fifteen, maybe even ten years ago, but now you must rely on stealth in lieu of speed and strength.

Not for long, you fervently hope. And while yet to gain passage to the hunters’ side, learning that there is more to life – and death – than this, makes you a twilight creature – a bearded vulture gorging himself on bone marrow of secret knowledge, gazing at everyone you see through the arson- hued prism of twisted myth.

You enter, taking the slushy central path and walking between skeletal pines almost deafened by the beating of your own heart – so much life, so much blood – until you spot the pink granite angel on your right, just where it was marked on the badly scanned hand-drawn map. When you turn into the oldest section of the cemetery you notice that what you mistook for the angel’s head is a marble cupid’ bottom, placed on the sculpture’s broad shoulders. The original head now rests under the plinth, crowned in snow and bird shit.

Most headstones in this part are unkept, the names of the dearly departed obscured by lichen or erased by the elements. How will you find the right one, with the dying light and the necessity to keep your eyes fixed on the traitorous frozen ground? 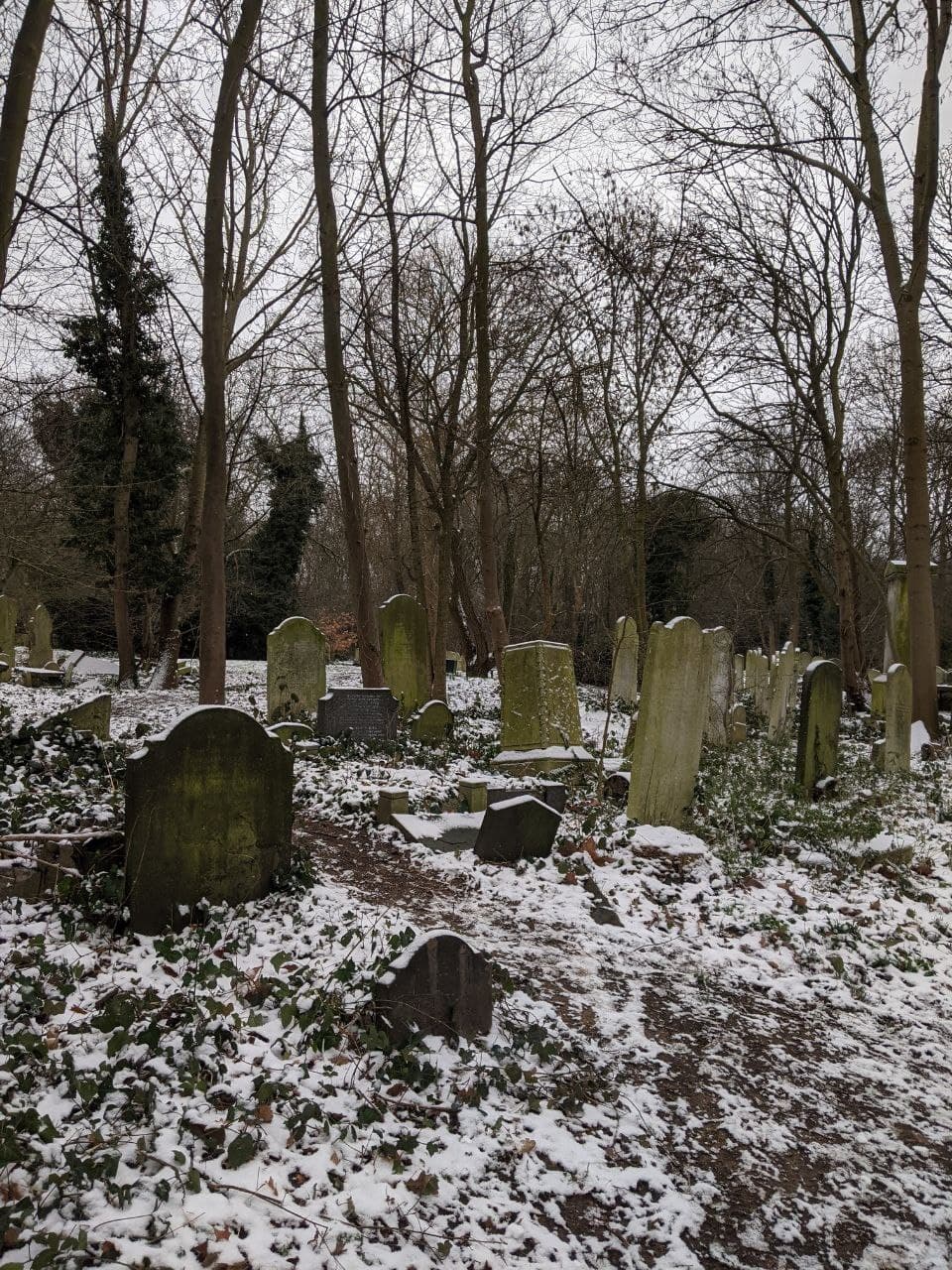 Ignoring the advancing orange blobs – stewards dispensing closure announcements before escalating into targeted assaults on stragglers – you hurry on, stopping only to check the landmarks against the map on your phone, until you spot what must be the grave you are after, glowing polished white between the chapel and the boarded underpass.

In your eagerness to read the gilded name, you slip and stumble just as you reach the marble slab, landing on your bad knee before the stone with hot tears stinging your eyes like a grieving widow.

But the stubbing pain quickly turns into elation and a raging erection: Yes, you are finally kneeling on the elusive resting place of Charlotte Hayes!

The irony of tearfully prostrating on that particular grave is not lost on you: recently bereaved beauties and professional mourner were the guises favoured by the hunter-hustlers you seek when this city was still a backwater colony called Londinium. Did any of the creatures who might accost you tonight run with the original Night Moths pack? Sources are conflicted on the duration of the period those cemetery parasites can endure on a diet of semen, fear and lust, but they all agree that it falls short of immortality. You are here to trade your dulling life for youth regained, enhanced, and extended, not for eternal existence.

An orange dot is gaining on you, indicating that it is high time to hide and wait until dark. Quickly but more carefully you rise and walk away from the grave as if making for the nearest exit, then dash into the underpass, silently thanking the local drug dealers who long ago bent a handy opening in the aluminium fencing. Sheltered from the wind but not the bitter cold you settle in, sipping hot coffee from your Thermos and trying to wipe the mud from your ski trousers while keeping watch on the notorious madame’s grave through the gap.

No matter how well prepared as you thought you were, your chattering teeth tell you that you will not survive here till midnight. Which did not mean leaving, but staying put, possibly drifting off and dying of exposure. You will not give up, not after mortgaging your future to conjure this yearned for encounter out of thin air and darknet rumours. But as luck – or invisible scotopic eyes – would have it, only a couple of interminable hours pass before the rising moon outlines a figure standing by miss Hayes’ grave.

Unsticking your back from the graffiti covered brick wall, shaking your numb legs and cramping bum, still in great shape for your age, seems to take forever, and you dread emerging to find the scout gone. But the stranger is still there, and when you stumble out of the underpass, the person, or creatures, allows you to get close enough to make out the leather jacket, skinny jeans, killer cheekbones, and gleaming army boots, before springing off into the ivy choked necropolis labyrinth.

Your heart rips at the abrupt disappearance of that tight denim ass, but rather then give chase you slow down, lingering by a tap on the edges of the shrouded snowy path leading to the little bridge highlighted on your precious map. You are suddenly burning with thirst, but the pipes must be frozen and it is not a drink of water you crave.

You waited so long, risked so much, and yet, you hesitate. You are terrified of growing old and the oblivion beyond, but wouldn’t success be just a different shape of death?

What is really stopping you from walking further, displaying yourself in the centre of that bridge under the massive venerable tree with its air roots forming a stalactites cave, is not trepidation of being transformed into a creature straight from the laudanum and sexual repression addled Gothic imagination.

No, what is turning the air in your lunges into drying concrete are the multiple darknet warnings that if you fail to be morphed by the agonising process, you will never be released.

The Night Moths are carnivores, not carrion eaters, but they loath waste, and did not survive for millennia by allowing their courters and prey to kiss and tell: if you fail, you will spend the rest of your natural life in captivity, chained deep inside the uncharted catacombs under the chapel, every drop of your blood, sweat, tears, piss and spunk ruthlessly milked and lapped up by the younger members of the pack.

Behind you, heavy boots and razor sharp heels stride on the frozen path with unnatural ease, and it takes every bit of the steel resolve in your clenched throat and bursting balls to avoid turning around, propelling yourself forward instead, across the bridge.

The moment you reach the dead centre, supple creatures spill out of the roots cave, bare chested, their eyes luminescent.

Shadows walk with them.