Back in action: Come ride my throbbing imagination!

Ever since that night on the moor when she was a girl of 19, the fateful night which changed her life forever, Eris had been searching for one elusive spell. The spell with which she can invoke a certain spirit again. A spirit, perhaps a demon, of night storms, iridescent gales blowing from another astral plane who transform those touched by them kindling flames of insatiable passions – and power.
In the years which passed since, Eris had become an accomplished witch and enjoys a moderate fame, or perhaps, notoriety. Now, for the first time in nearly a decade, she may have a chance of laying her hands on the book where that spell is rumoured to be found. A scholar – he said his name was to difficult for most folk to pronounce but she can call him Len – had answered her carefully coded letter, claiming that yes, indeed, he had recently obtained the original and complete Key of King Solomon. Including the pages thought to be lost, amongst them the one in which the words, acts, and offerings required to summon that specific storm demon are to be found.
It will not be cheap, but did she not say she is willing to pay any price?
Sensible of the growing power and reach of the church Eris has taken some care in selecting the venue in which that long sought for rendezvous was to take place: she has paid for a room in the house of a London abortionist, highly discreet, and known to occasionally dabble in the occult.
When Len knacks on the door Eris is troubled by a sense of foreboding, followed, once she admits the hooded stranger into the room, by an uncanny surge of desire.
Despite the roaring fire in the grate Len remains swaddled in his cloak even as they perform a cleansing ritual and draw a magic circle. Eris asks to see the book, but Len insists that first she must cast a simple spell in order to prove that she is a witch worthy of possession and capable of understanding such a powerful and dangerous item as The Key Of Solomon.
Eris closes her eyes and starts chanting. She opens them to find her hands shackled. 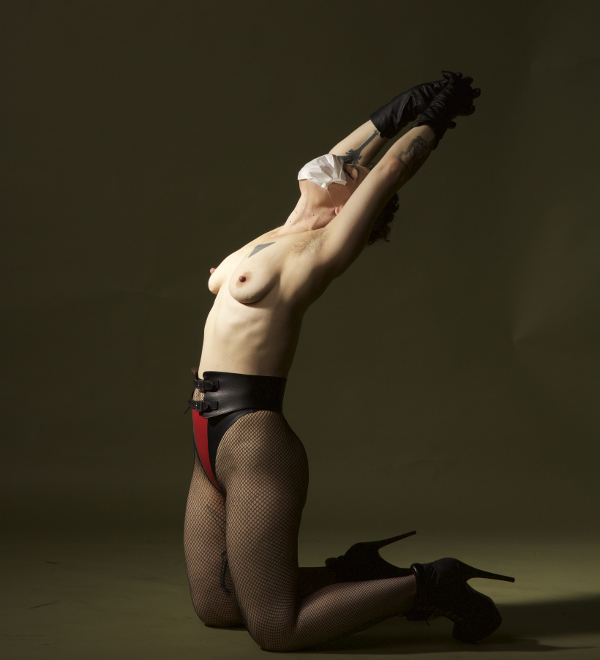 Len reveals himself to be a witch hunter, and announces that thanks to her desperation to lay hands on the forbidden book now he has plenty of evidence for a trail which no doubt will result in the witch being burnt on the stake. Crying out for help will not do her any good, since the abortionist who had let Eris the room has recently been recruited by the church to entrap suspected witches in return for saving her own skin.
However, states the false occultist, he must conduct additional tests, gauging Eris’ resistance to certain forms of torture and establishing whether she has, like all witches, unnatural sexual appetites.
Eris bargains for her life. Surely there is something she could do…? Utilising her considerable powers and charms and the very tests and the witch hunter subjects her to in her efforts to sway Len. During the course of those trails she lure him into the magic circle and to her amazement, he seemed unable to breech the invisible boundary.
As the clock strikes midnight Eris says an incantation. She doesn’t know where the words came from, they seem to have mysteriously lodged themselves on her tongue.
A gale shakes the house and it dawns on Eris that yes, she had finally done it: trapped an incubus trapped inside a magic circle. A nefarious Lilu! Will she be able to bend the cunning creature to her will?

On the edge of whatever it is you are currently sitting on?
Write to me: erisbent@protonmail.com with a tempting session request, and find out what happens next.