Me and my ferocious playmate in our natural habitat:

Six nights ago you were sculptured from river bank mud. Three times the sun had sank behind the castle spires since you were fired up and glazed by master’s cunt. Two spring dawns revealed the woodpile pyramids and tubs of salting fish you fetched under the cover of darkness, preparing for siege.

The fish had not crisped yet when the mob came crying blood-magic, the cursing and murder of children. Laying the blame for the plague wasting their sons (no mention was made of the daughters) at the ghetto’s gates .

Those gates won’t hold for long: they were built to keep docile subjects inside and apart from the fold, not to deter grief and hate addled mobs. The city guards assembled outside the wall may keep the peace, but the young rabbi, your master, had told you how in the far away pogrom he fled from, the guards had put their swords in service of the mob.

‘Things are different here,’ said Máša the widow. ‘This is the capital, a most civilised metropolis.’

As if hearing the question boiling behind the name of God on your tongue which had rendered you dumb, she added, ‘here, they merely stand by and watch as the horde slaughters us.’

The widow is right. Stationed with your back to the gate  you can see the guards keeping a safe distance as rotten vegetables, pig heads, and cobble stones  fly. They will look on impassively as the braying mass presses forward, brandishing clubs, cleavers, and hooks. 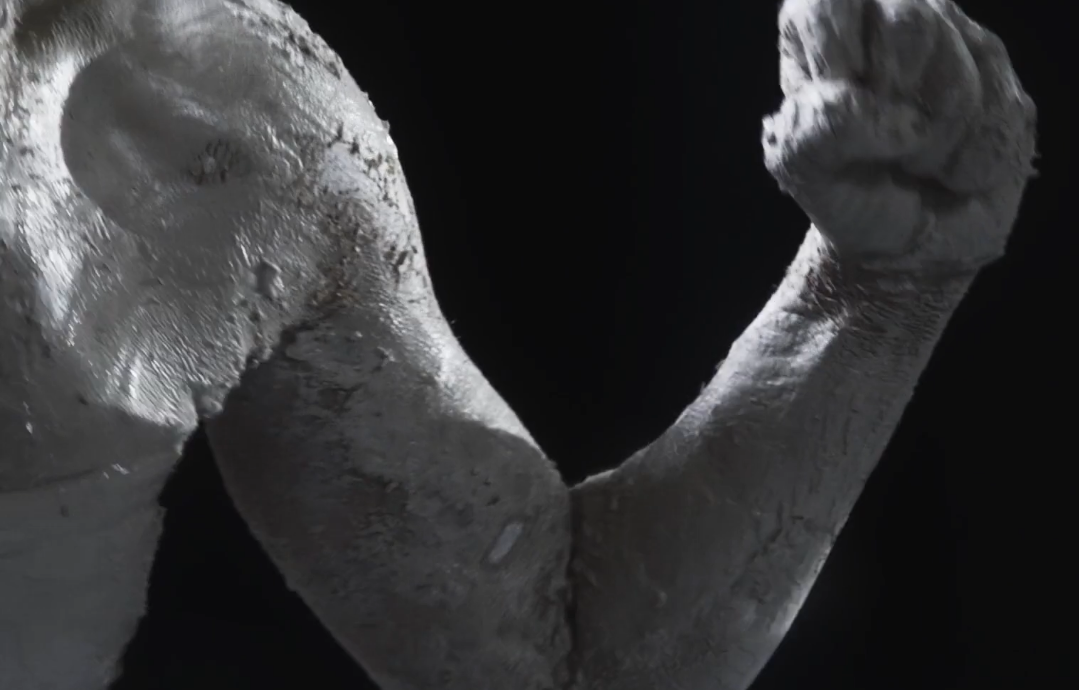 But there will no slaughter here today. Not on your watch. This is what you were made for: a giant warrior of frozen mud hot humours and holly words, shielding the ghetto from the horde.

Missiles bounce off your glistening clay chest. Slimy cabbages and reeking turnips splatter on the TRUTH carved upon your wise brow, a putrid hunk of animal flesh lands between your legs, causing much merriment. Pottery, wood, and stone follow. When those fail to dent your composure, the mob attacks.

Fixing them with your burning eyes you dare not turn back and look upon your people gathered in the cobbled square behind the wall. The rabbi, the widowed fishmonger, the seamstress and her pretty apprentices, the children who admired and taunted you peering from the school’s windows, the men who called you an idol and a creature of Sheol: it falls to you to save them all.

It is told how when the mob charged the gates you swept the attackers right and left with your strong clay hands, sending them up in the air and crashing to the ground. 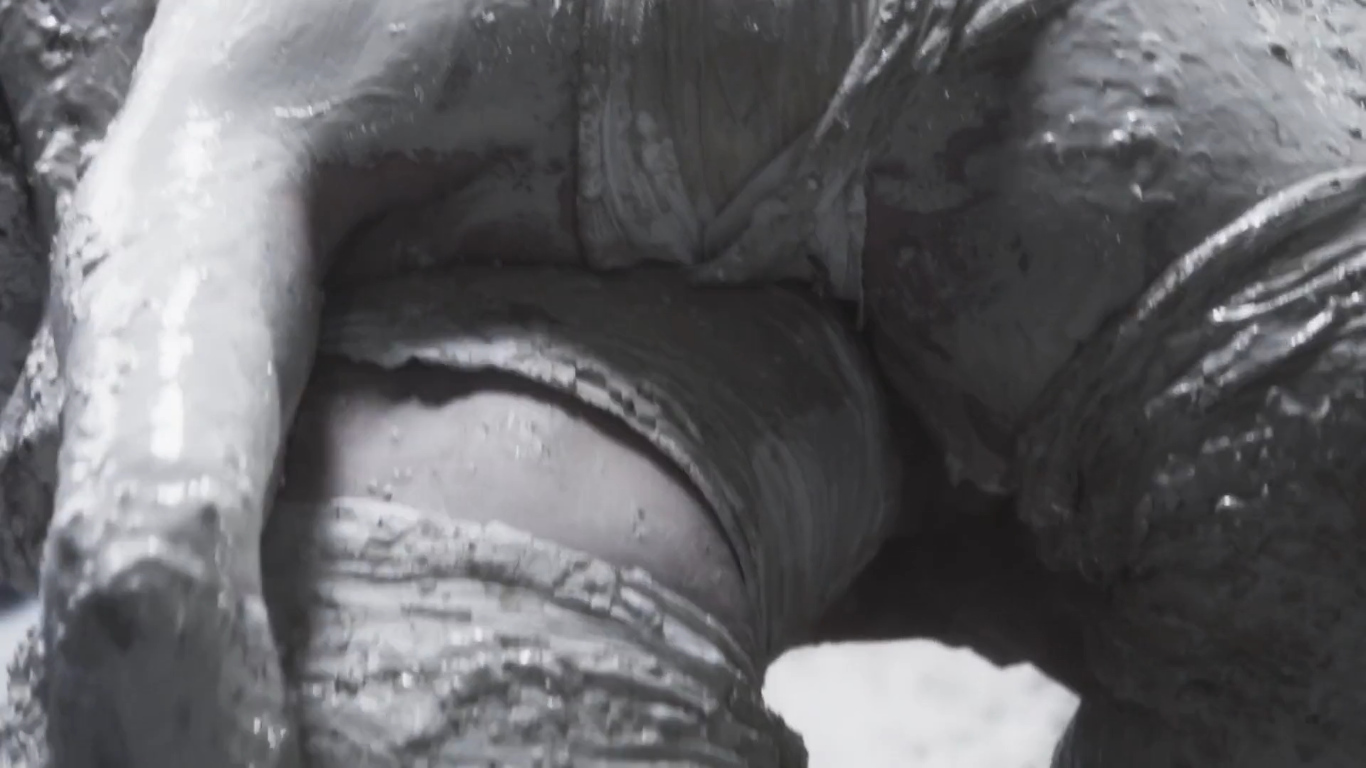 Never how you stared incomprehensibly at the inanimate bodies, the split bones, spilt brains and sludgy blood, horrified. Or of the hideous sounds the mortally wounded made.

It is not told how in battle frenzy you were deafened to the rabbi shouting ‘stop!’ over and over again from behind the groaning gate, the voice that ruled your world reaching your muddy ears only once the deed was done. Many deeds, many lives taken, although you were just one, and not alive, not a man. But it is written, often, how the death-dealing mob fled in panic at the sight of the fallen.

Later, in the attic, master cried and kissed your tainted behemoth hands. He tried to wipe them clean with his cloak, but to no avail: the blood seeped into the gritty river clay. The rabbi composed himself. Perhaps there was a way to cleanse those stains.

You sank to your knees and listened to the music and dancing in the courtyard for a long time, before raising your eyes to find the rabbi naked from the waist down.

Was it the name of God on your tongue, the word which burned him so, that he meant to deploy? It was not your mouth that had breached the fifth commandment today, again and again and again.

And yet, you kissed him. Stony lips reverently brushing his secret organ with trepidation, dreading the order to halt. Sucking and biting to the rhythm of his strained breathing mutating into almost inaudible groans growing shamefully desperate, until you gave master your searing tongue again, lashing his wet meat and making him cry out with such reckless despair you feared alerting the revealers celebrating deliverance from evil in the square. 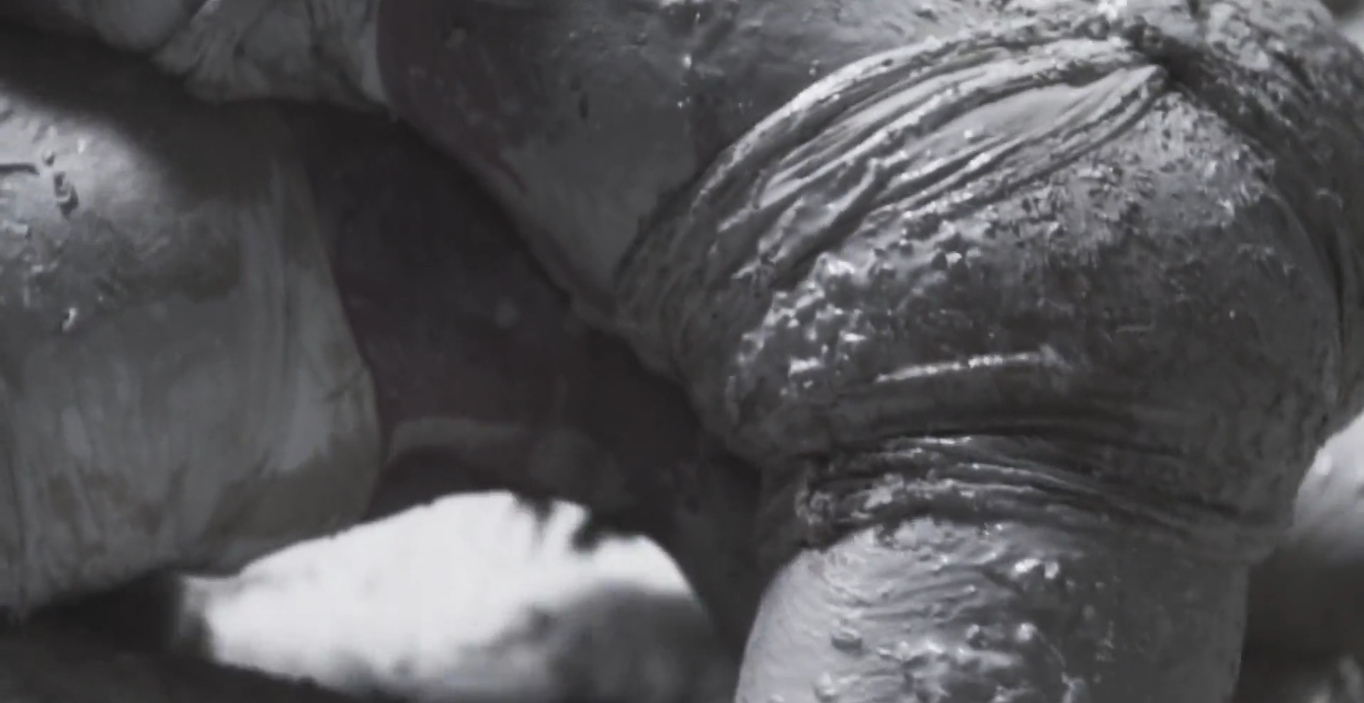 Even more shocking were his first coherent words, when they came.

Knowing full well that try as he might the rabbi could not withstand such torment unaided, you risked the irk of earthly master and the lord above, trapped the quivering rabbi in one huge palm then slowly impelled him the on a clay finger the size of a sausage that could last a family the whole winter.

Resolve broken, he struggled, pointlessly: your maker knew best of all how invincible you were, and the rabbi’s frenzied rocking only caused your muddled killer finger to sink even deeper, bruising and stretching, while your cracked lips taunted his inflamed knot of crimson nerves.

You withdraw, ignoring master’s protests, only to shove two clay blood sausages from an ice giant’s pantry deep inside him, curving new pathways. 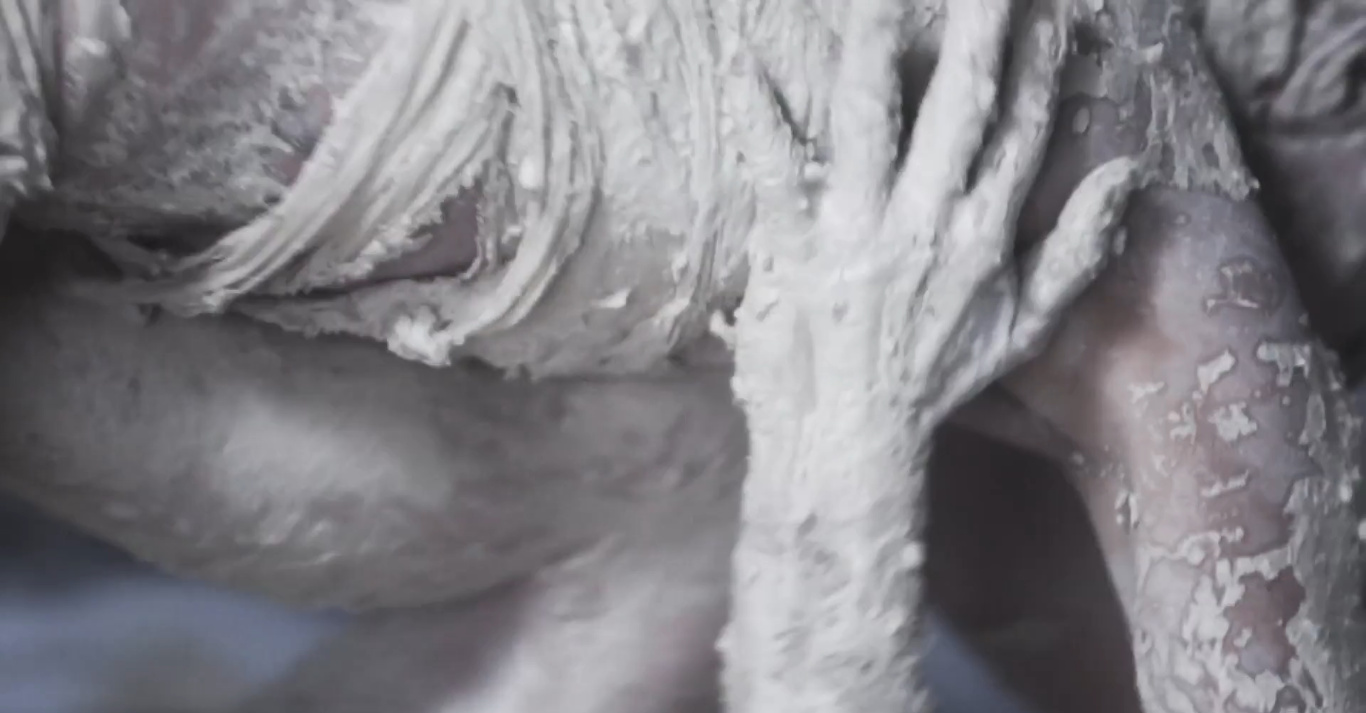 None of this is ever told. But you know as well as anyone that it is true what they say: the following day the rabbi was summoned to the castle.

Oozing anxious royal wrath, the emperor stuck out his Habsburg chin and demanded to know if your master means to destroy the city with his clay monster. All scribblers agree that the rabbi denied such traitorous ambitions, but not your ability to execute them, and calmly extracted a guarantee for the safety of your people. The emperor agreed on one condition: the mud man must be destroyed that very night.

The story goes that the rabbi was true to his word. That he went back to the attic and chanted Cabala spells over your sleeping body. That you slowly started losing your man’s shape, your face and hands melting back into a pile of clay. That master and his helpers wheeled cartloads of disenchanted mud back to the banks of the Vltava.

True, that night you were hacked. Remoulded. Spellbound. But not how they tell it. Not at all.

That night, master’s helpers stripped off your warrior’s tunica and spirited you away, naked under the barrels of a night-soil wagon.

Máša cracked the whip to urge the horses, their hooves wrapped in sacking, out of the ghetto and onto the sleeping city, past the market, the castle, churches and taverns, not slowing even as the streets grew meaner, until you reached a cowshed by the outer wall.

Of the cows who were penned in the shed, only fresh dung remained. Caking your bare clay feet as they surrounded you again: the rabbi, the widow, and the young lad who accused master of making a demonic creature.

Once more, they chanted ancient words. Twice over they smeared you in life and death secretions, and from the widow: the seed of animals and man. On the third round the lad scattered precious resin crystals in the bovine droppings and lit them, trapping you in a magic circle of thick intoxicating smoke. Then they raised their blades: the widow her fishmonger’s knife, the lad a contraband dagger.

But it was master who stepped inside the boundary. Empty handed and naked. 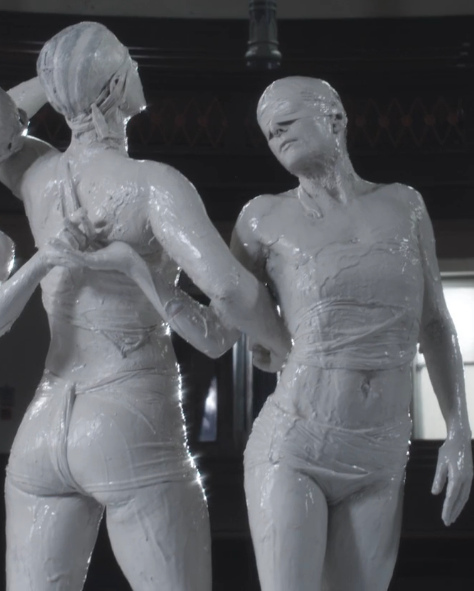 Only when he stood so close that his erect nipples poked your belly causing the coiled mud cock buried inside your smoothed groin to thrash against its clay prison walls, you saw that the rabbi did carry a weapon: a tiny file held between his teeth. Dripping with his secret juices.

Again, he told you to kneel, and forced you jaws open with his left hand. The right one darted to his mouth and descended on your forehead, working away.

Understanding and rebellion reared in tandem. Master was scouring the first letter of the word TRUTH carved on your brow, thus altering its meaning to spell DEAD MAN in the old language. He must also be preparing to extract the secret name of God embedded in your tongue!

You knew nothing of spells and enchantments, but every grain of your being grasped the meaning of such acts: turning a mud monster back into a hulk of insensible clay.

You were the rabbi’s creature and would have done anything he commanded. Anything but being made unable to love him.

And so, you struck your master. A blow which should have send the slender scholar flying through the cowshed’s wall but did nothing of the sort.

Smiling, the rabbi dropped the file and raised his hands, growing taller in the smoky semi-darkness. Or was it you who grew smaller, diminished by this inconceivable sight of the hansom youth, so soft skinned and and fine boned, challenging you to a bare knuckles duel?

But fight you did. Grappling and rolling in the slippery cow shit as the night ebbed away, and only when the rabbi was coated in flacking clay, nearly spent but still inhumanly strong, you finally realised he was drawing his power from the same source as you. 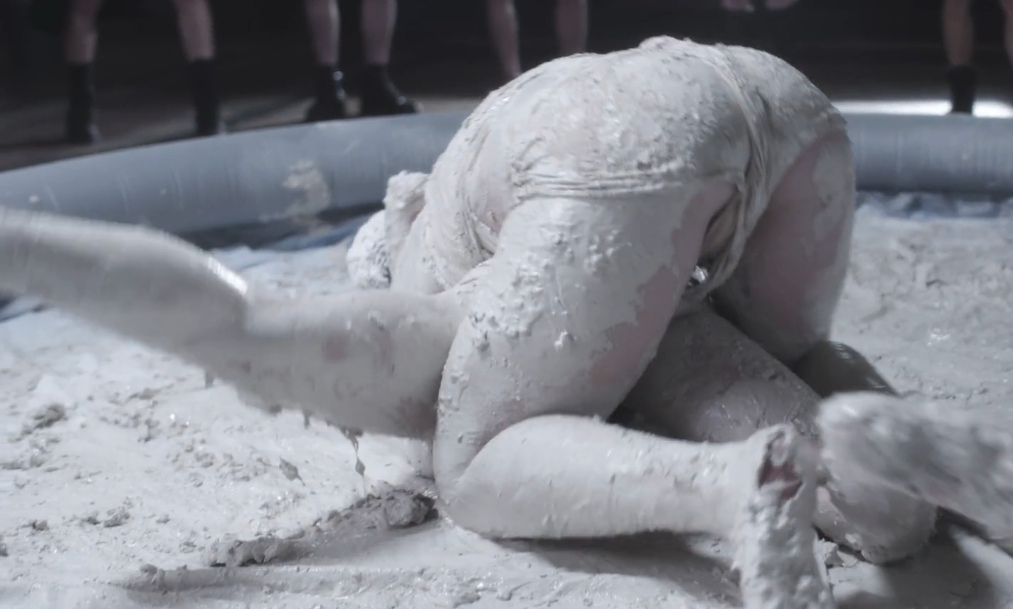 Head-locked against his chest, you ceased fighting, letting master spread your mighty thighs wide open with his lean legs as Máša crossed the magic boundary, serrated knife homing on your crotch.

The widow made a neat incision with one sure stroke, cutting a path for master to reach down and extract your cock. So great was the pleasure of his hot hands gripping your hidden organ at long last, that you hardly felt the pain when he ripped it out.

Together, the lad and the widow set to work, moulding the lust-softened clay into a beautiful labyrinth of glistening tunnels and curled clay snakes. When they were done, the rabbi stood up, his cunt level with your head, and put the giant exhumed member in your eager hands.

‘Stick this were it belongs.’ 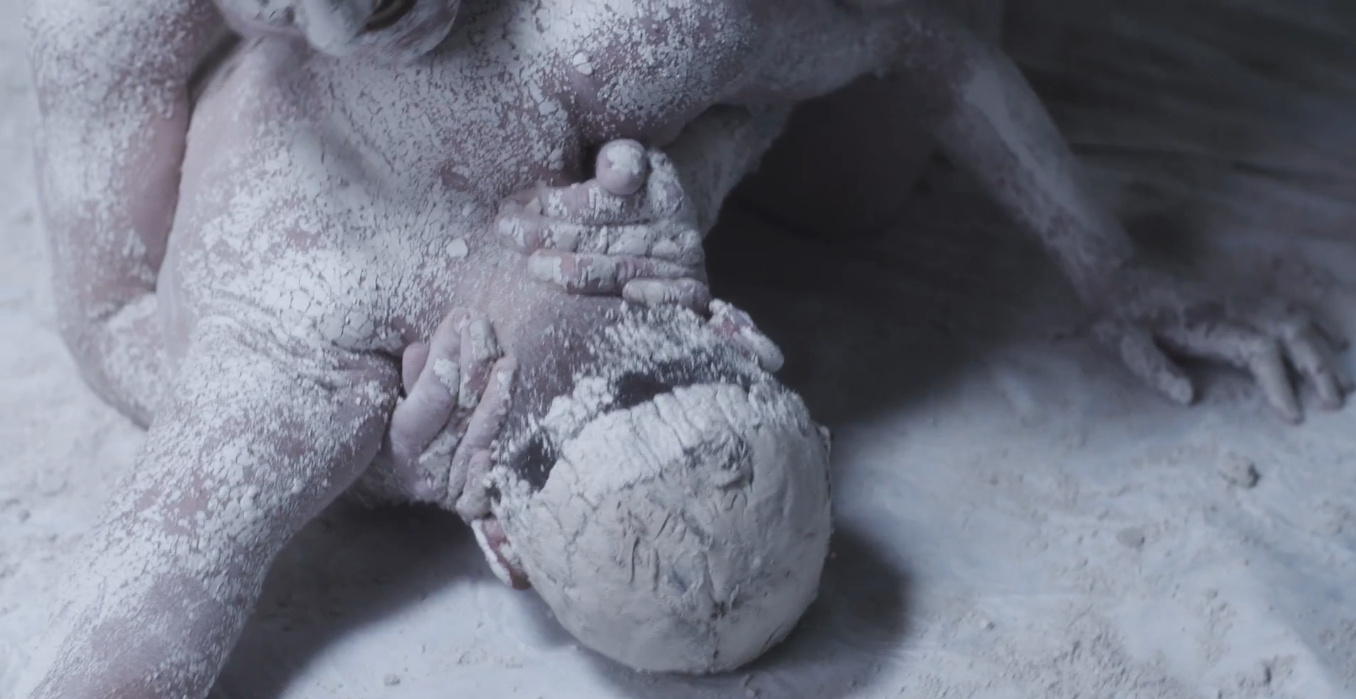 Dirt-skin blushing, you did as commanded, and once done, sucked his new cock until the church bells rand nine times and the master clawed your softening hair, yowling and grunting like a new breed of beast. Removing your sore mouth, a soggy square of parchment fell to the mucky ground, the secret divine name inscribed on it erased by your warming spit.

The night soil cart awaited outside to take you both down river. But before you rose from your knees and crawled under the barrels, before escaping together to seek your wild hybrids fortune, you opened your mouth, looked into master’s eyes, and uttered your first word.